For many of us, the exposed ridges and hidden valleys of the Carneddau provide an otherworldly escape from our increasingly urban lives. It may, therefore, be surprising to find out that the story etched into these slopes reveals several periods of intense human activity. From the Neolithic monuments occupying the summit plateau, the patchwork of Bronze Age field boundaries criss-crossing the foothills, to the slate hollows carved out of the hinterlands, the Carneddau clearly represents one of the most concentrated archaeological landscapes in Britain.

Centuries of land clearance and farming have also produced the short-grazed upland pastures that are favoured by birds such as the red-billed chough for feeding on soil invertebrates. However, the encroachment of gorse across these sites threatens the existence of this rare species and archaeology across the Carneddau. This is because gorse reduces available foraging grounds for chough and creates an ideal habitat for animal burrowing that undermines archaeological structures. Vegetation clearance as part of the Carneddau Landscape Partnership aims to protect archaeological sites and improve foraging habitat for chough by increasing habitat diversity, as well as engaging local communities in conservation work and local heritage. 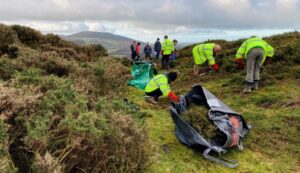 The turn of the new year saw the project off to a great start, with the National Trust, RSPB, SNPA, Snowdonia Society and volunteers all coming together on Moel Faban to uncover the remains of a fortified hut settlement on its north-western slope. To the untrained eye the site could be mistaken as mere heaps of earth and stone, or part of the surrounding waste slate piles. Thankfully, National Trust archaeologist Kathy Laws was on hand to help us identify the Iron Age enclosure, consisting of six huts which appeared as terraced platforms in the sloping spur. Gorse was removed from the perimeter of the hut settlement by cutting as close to the ground as possible using loppers. Like leafcutter ants, volunteers loaded the gorse into rubble bags that far exceeded their size and weight and dragged them down to a safe area to be burned. This method of disposal also proved handy for toasting marshmallows, the perfect end to a day’s work. Also in attendance were the BBC Countryfile team, so if you’d like to see Snowdonia Society volunteers in action, please tune in to this Sunday’s Countryfile feature; or sign-up to one of our volunteer opportunities on Better Impact. 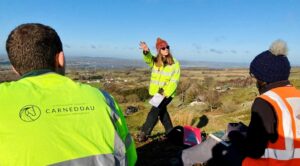 Learning about the archaeology of Moel Faban; Owen Davies.

Although each generation has left its own distinctive scar on the Carneddau, their symbolic importance for local communities has remained constant, hence, we owe it to the mountains and our ancestors to help preserve their story. 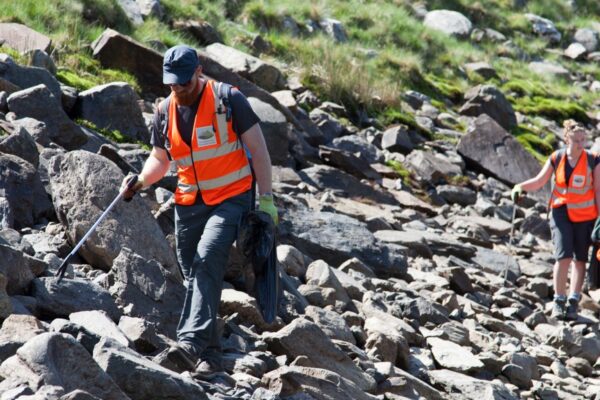 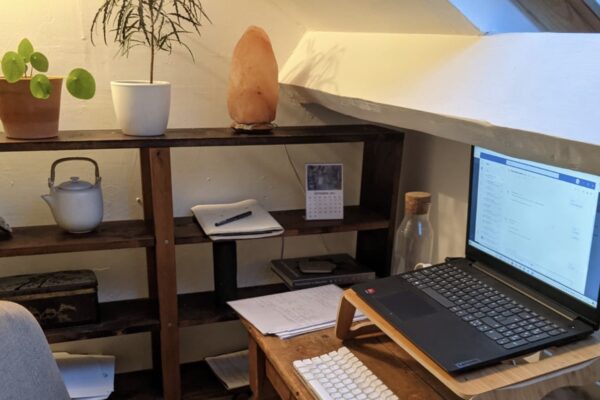