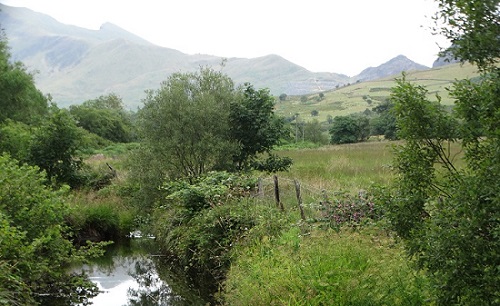 Another day at work for the Snowdonia Society’s director

What made me take this road, I wonder?

It might have been the sandwich on the passenger seat, which had just started a conversation with my stomach.  But something else made me turn off the A487 on to the ribbon of road into Cwm Pennant, as I returned from the National Park offices in Penrhyndeudraeth.  I parked, stopped the engine, turned off the radio. I got out of the car and let the sunshine and Cwm Pennant into me.  I’d spent the last few hours in another world and I needed to get back to the one I know and love.

The birds were quiet, or elsewhere, their summer’s work already done.  Sheep bleated without conviction in this spell of heat between the seasons.  Only a distant tractor hinted at industry.

What is there in this backwater? A river which in this dry spell gathers a little clear water off the backs of Moel Hebog and the Nantlle ridge.  There’s a campsite and a chapel, and a painted sign offering the temptation of Mêl Mynydd – Mountain Honey.  Scattered farms sit lightly on the land by modern standards; this is a place where trees still know how to plant themselves and wild flowers fill the unused spaces as if they belong there.  The church’s door is locked, coloured windows obscured by rust-dripping grilles and the graveyard grass is roughly chopped.  The graves repeat the names of a few deep-rooted farmhouses and the families that belonged to them through good years and bad. Their names have been carved by different hands over time but mostly in the same slate.  The most recent burials – the last about 30 years ago – speak of change with exotic tongues of shining marble.  Some stones lean against hard-baked anthills which seem to offer their support, fellow monuments to generations of workers.

Why was I there?

I had spent the past hours in Inspection Hearings, the final act of the review of Snowdonia’s Local Development Plan. For some sections of the three-day hearing the Snowdonia Society was the only representor present – a reminder of the vital role we continue to play.  Indeed the Society had played its part from the very beginning, writing detailed submissions and arguing for the protective policies we believe essential in the long-term interest of the National Park.  Now, with papers and notes in front of me, my task was to make sure that those points had been clearly made, speaking up for conservation at what seemed the right places.

But today’s agenda was different, covering the Enterprise Zones at Llanbedr and Trawsfynydd.  This subject brought in by far the most contributors and for this session I found myself sitting next to a row of gentlemen in dark suits. They brought assured presentation, well-polished arguments and reports printed on such bright white paper which make it all seem so reasonable.  Reasonable to ‘make things a bit clearer’ for developers here and there.  Reasonable to be ‘a bit more flexible’ over major development in a National Park.  Reasonable that policies which offer some slender protection for landscape and nature must be ‘balanced’ so they do not become obstacles. They would be well on their way back to consultancies in Cardiff by now.

An ant might feel like this, tasked with holding up a slab of stone.  I did my best to make the point clearly about the need for a long-term view.  Technologies come and go.  Developments come and go.  In Snowdonia the quarries came and went, just like the one at the head of Cwm Pennant. The airfield at Llanbedr came and went, as did the nuclear power station at Trawsfynydd, closed down after only 25 years of operation, leaving a legacy in the lake that no-one discusses.  A ‘spaceport’ – whatever that means – and drone technologies may yet materialise at Llanbedr. but they will not last like the mountains, woods and rivers.  And the same will be true for ‘small modular reactors’ – technology which doesn’t yet exist but is already being proposed for Trawsfynydd.  They will come and they will go.  What matters, surely, is what remains.  And what remains will depend, in this National Park, on consistent protection which looks to the future and ask what we want to see there.  That protection stems from tools such as planning policies; these words, weak as they sometimes are, are all there is.

It isn’t easy, trying to counterbalance the relentless economic rationale, when the odds and resources seem stacked against conservation.  That’s why I felt the need to take my lunch in the sunshine of this lovely valley.

Low between its banks, the Dwyfor was hardly more than a stream, flowing slowly under heavy July sunshine.  But suddenly it is at the centre of things. Here come the dragonflies – ancient yet immediate, like this landscape.  Two contrasting kinds, Golden-ringed and Beautiful Demoiselle, launched by the sun, these miniature predators patrol the waterway.  The larger drones take possession of the airspace in yellow and black warning colours.  Their flight is muscular and direct, so powerful that each turn is fractionally overdone and has to be compensated by a tiny adjustment.  In the side channels the Beautiful Demoiselles make their own hovering sorties, irridescent in metallic green and turquoise, their delicate build masking pinpoint precision in confined spaces.

Absorbed by the dragonflies, rinsed clean by the sound of fresh water, warmed by the sun and with lunch now inside me, I felt human again.  Thank God for unspoilt places, their human stories and the endless unfolding of nature they permit.

In case you are wondering, the title of this piece echoes the final haunting lines of a poem by Eifion Wyn: ‘Pam, Arglwydd, y gwnaethost Gwm Pennant mor dlws? / A bywyd hen fugail mor fyr?’  Roughly it translates as: Why, Lord, did you make Cwm Pennant so beautiful, when a shepherd’s life is so short?