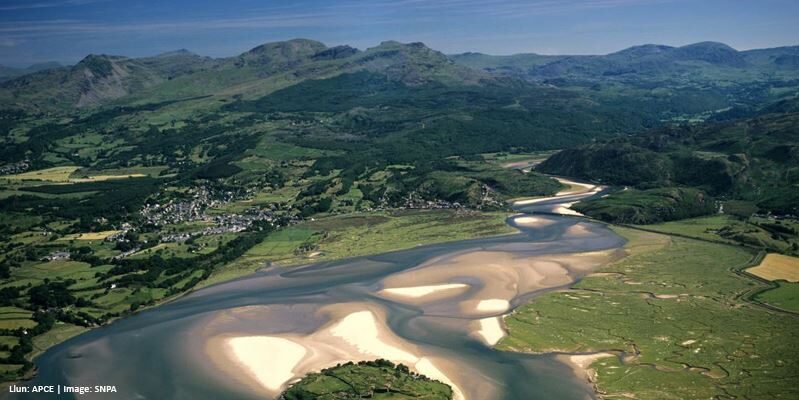 Plans to reduce the visual impact of electricity infrastructure on the Dwyryd estuary were approved this Wednesday.  Over the last five years the Snowdonia Society has consistently supported and contributed to the process that has reached this important milestone.

At a meeting of the National Park Authority’s Planning Committee on 1 July, planning consent was granted for the erection of a tunnel head house to the south east of the Dwyryd estuary on the edge of the National Park. This development will enable the National Grid to proceed with plans to underground 3.4km of cabling that currently crosses the estuary overhead.

The Dwyryd estuary is one of four locations across Wales and England to benefit from the National Grid’s Ofgem funded Visual Impact Provision project to minimise the visual impact of electricity infrastructure in Areas of Outstanding Natural Beauty and National Parks. The undergrounding of the cables will enable the removal of ten electricity pylons that have been a blot on the landscape since their erection in 1966 to transmit electricity from the Trawsfynydd nuclear power station.

The opening for the tunnel that will house the underground cables will be inside a tunnel head house located off the A496 to the north of the small settlement of Llandecwyn. The building’s location on the foot of steep surrounding hills, coupled with a sensitive design to blend in with the landscape, will minimise the visual impact of the development.

As the development spans two Planning Authorities, planning permission for a tunnel head house on the western side of the estuary will be determined by the Gwynedd Council Planning Committee on the 16th of July 2020. The tunnel itself is not subject to planning permission as it is permitted under the Electricity Act 1947/57. All relevant environmental and archaeological organisations were consulted as part of the application, who were satisfied that the development would not have a detrimental impact on the landscape.

The work will begin in 2021 and is expected to take five years to complete, with a proportion of the work undertaken by local contractors. Local Councillor, Gareth Thomas welcomes today’s decision:

“I’m happy to support this project, not only because of the clear economic benefit, but also because of its visual benefit. The Dwyryd estuary is one of the most beautiful places in Wales, but there is currently a glaring scar across the estuary and peninsula. The project will significantly improve the area’s appearance for the benefit of local people as well as visitors.”

“I am delighted that following this important decision, we are another step closer to the removal of these power lines.  The effect will be transformational, and locals and visitors alike will be able to enjoy the unspoiled splendour of the Dwyryd Estuary for the first time in generations.  The project is the culmination of five years of teamwork and consultation between National Grid, local and national stakeholders and crucially the local community.  We will now wait and hope for a positive outcome from Gwynedd Council’s planning committee when they consider the proposals on 16th July.”

“We’re delighted that the Snowdonia National Park Authority has granted planning permission for our proposals to reduce the visual impact of a 3 kilometre section of overhead line across the Dwyryd Estuary. This is a major landmark in the project’s progress and we would like to thank the Park Authority for the constructive advice it has given us throughout the process.  From the outset our proposals have been very much shaped by stakeholders and we now await the decision from Gwynedd Council on 16 July 2020 for the section of the project that falls within their area.”

On behalf of the National Park Authority, the Chair of the Planning Committee, Cllr. Elwyn Edwards said:

“While careful consideration must be given to an engineering scheme of this nature in a designated area, we are happy to support this scheme that will ultimately substantially improve the character of the landscape and the visual amenity of the Dwyryd estuary.”

The Snowdonia Society continues to work closely with the National Park Authority on planning and development issues which affect the integrity of Snowdonia.